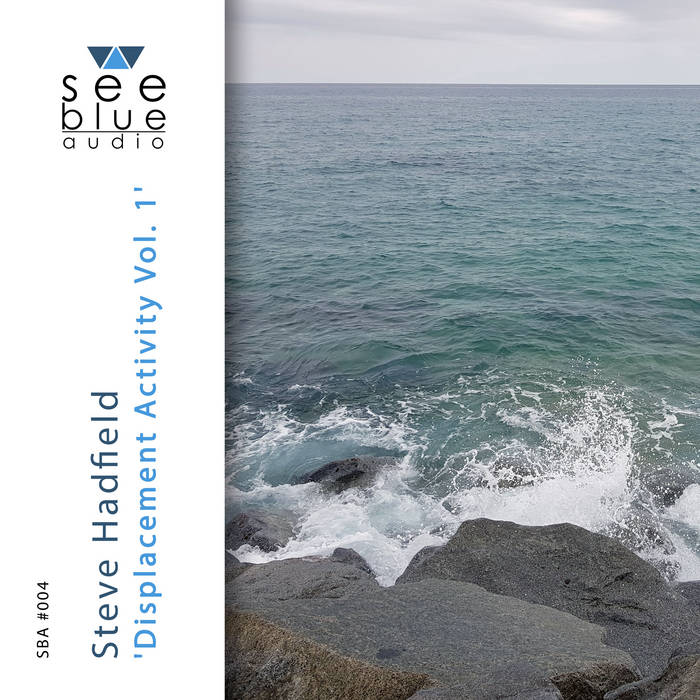 See Blue Audio begins 2020 with another release from Steve Hadfield following on from the ‘Temporary Lapse’ EP. ‘Displacement Activity Vol. 1’ is the first in a series of collections of music with the second volume to be released later in the year and more to follow. Over its six tracks, Steve reveals a different side to his sound and influences, and one born out of his recent personal experiences: ambient/modern classical with glitchy electronics.

Drawing on his passion for defining experimental and ambient artists like Alva Noto, Ryuichi Sakamoto and Murcof, Steve set out to craft his own style which reaches its conclusion with the ‘Displacement Activity’ series. Field recordings also form part of his musical landscape; likewise, Steve’s fascination with space and how Planet Earth could appear as seen from faraway. Displaced, in other words, with the full title referencing a spaceship in Iain M. Banks's science fiction novel 'The Hydrogen Sonata'.

Using his imagination as a starting point – does the Moon view the Earth with the same reverence? – and slowly finding his musical path, Steve was also brought back to reality with the impending arrival of his first child in 2019. An intoxicating mix of excitement, nervousness and uncertainty is reflected in this music, not least as the rise of far-right politics worldwide provided a distressing backdrop. This vast array of ideas and emotions has seeped into ‘Displacement Activity’, which uses a similarly wide range of sounds and textures from beatless soundscapes to dramatic electronica.

‘The Sunlight’ opens the collection and, as the title suggests, it’s a burst of warm celestial light based around rich synth sounds that slowly transform into something more brittle and with a churchlike intensity. ´Tremors’ follows and the theme of space is further explored; this is a journey into the deep beyond where fear and paranoia creep into the edges of your mind. By way of contrast, ‘Space’ is a short sketch of morphing piano notes that takes us back to some kind of natural world.

‘Reflections’ continues the piano form but is then slowly enveloped by ghostly electronic fragments. The feeling is one of gentle awakening and the discovery of new life. As the title ‘Displacement Activity’ suggests, these tracks are also about contrast, and we get that with ‘Gaze of the Moon’, where our perception of reality is shaped from another angle. Drone-like electronic calm is punctured by sudden rushes of cold, piercing light before sliding back into the shadows.

Completing ‘Displacement Activity Vol. 1’ is ‘Middle Distance’ with its shimmering ambience, and its dreamlike quality is a fitting conclusion to this extraordinary collection of music. With this release, Steve Hadfield has pushed through the boundaries of his own musical knowledge and capabilities, but also taken a journey inward and shared his inner psyche.

Review in Issue 61 of Electronic Sound magazine: “Dwelling in a mix of excitement, nervousness and uncertainty, and side-stepping his previous darkness, tracks like ‘The Sunlight’ burst with warm synths and gospel intensity – a lush high from a dreamy, emotive collection” (James Thornhill). Also reviews on the At The Barrier and Magazine Sixty music websites.

All tracks written, produced and mixed by Steve Hadfield.

Co-founder of the Disintegration State label, which aims to promote underground electronica.

Based in Leeds, sketching soundscapes on my laptop in the attic. I make ambient, IDM, and drone music that I love, and I hope you like it too. ... more

Bandcamp Daily  your guide to the world of Bandcamp